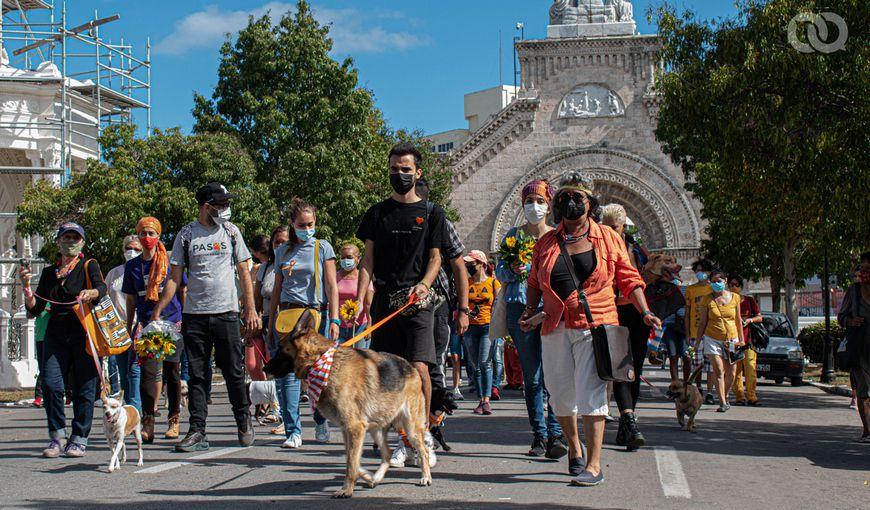 Animal Rights March in Cuba, Despite No Authorization 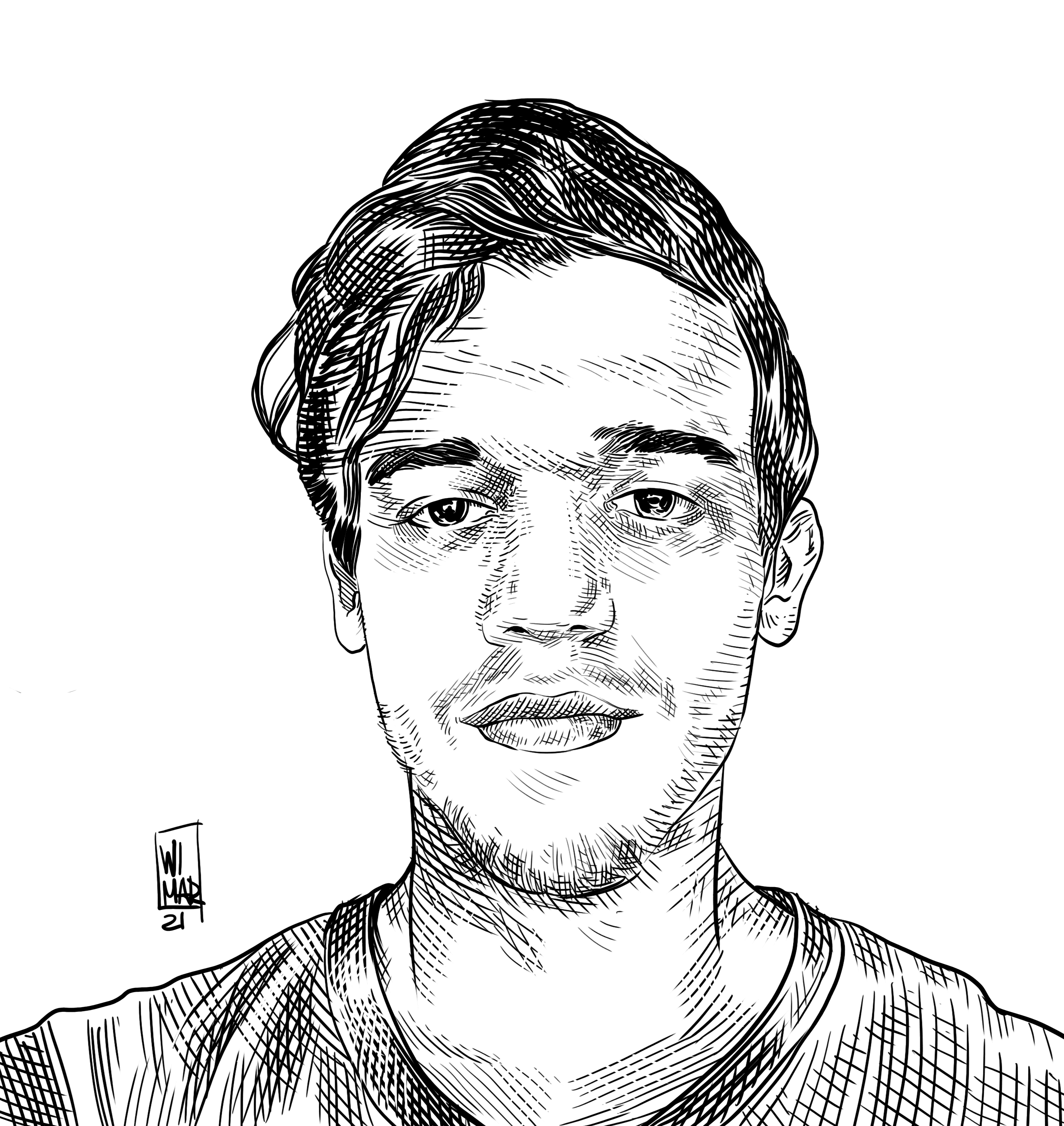 On Sunday 10th April, Dog Day in Cuba, dozens of people met outside the entrance to Havana’s Colon Cemetery to go on a pilgrimage to Jeannette Ryder’s grave, a US philanthropist living on the island who dedicated herself to looking after plants, children and especially animals.

“The majority of us here are independent protectors and we seek to pay tribute to Jeannette Ryder’s great work, to our own work and to raise people’s awareness about looking after animals,” Gilda Arencibia, an animal rights advocate for many years, said. “We have a lot of love for animals, especially the animals in our country, who have always been unprotected and abused.”

A few days ago, a cat was thrown into the ring during a show at the Rancho Boyeros Fairground, so people could chase it, lasso and beat it. Photos went viral on social media. As did the animal rights community’s outrage. Days later, it was reported that the people responsible were fined 1500 and 3000 Cuban pesos.

“The solutions they give us are fictitious, a simulation. As far as I understand, Decree-Law (No.31/2021 of Animal Protection) doesn’t do absolutely anything to protect animals and animal rights advocates, who are unprotected. There is no law that protects us,” animal rights activist Saily Maria Garcia said.

The cat in the ring incident was the main reason for animal rights advocates meeting at Colon Cemetery, holding signs against animal abuse and wearing orange clothes, the color of this cause.

The idea to march isn’t new, but there were different efforts to quell it this year.

Jeannette Ryder’s grave displays a statue of the lady’s body lying down with a dog laying at her feet. Rinti was her pet and the story goes that when she passed away, her dog laid in front of her grave and also perished, refusing to eat and drink.

This grave is a symbol for animal rights advocates, which is why it is the final destination for the pilgrimage. They gather around the grave. They fill the edges with different kinds of flowers and cover the grave with a Cuban flag.

They walk past Maria, who receives applause from the whole crowd. Maria is a short and wrinkled old woman, with white hair. They ask her how long she’s been working with animals. Maria remembers being in the cemetery for years, when she was called to look after a dog that had been bitten by rats. Then, there was another dog with scabies. Somebody from the crowd corrects her: her work dates back a lot further, she’s been looking after animals for many years and is one of the founders of today’s animal protection movement in Cuba. Maria nods and says she has photos of that dog’s face full of scabies. She’s only interested in talking about the dog, about how much the dog needed her help.

There are lots of people like Maria taking part in the short pilgrimage, who dedicate themselves to looking after animals, treating them, rescuing them from precarious conditions, looking for families to adopt them…

“Patricia, who isn’t here today, was summoned to a police station yesterday, even though she hadn’t committed a crime, has never had run-ins with the Law, has always given her body and soul to animals and nobody has ever knocked on her door to give her a plate of food,” animal rights activist Freddie Filo tells the crowd. “It’s sad that she isn’t here on a day like this. She is always with us here. She also founded this.”

Behind the group, on the other side of the passageway that separates one block of graves from the next, several State Security agents dressed as civilians supervised the march. The pilgrimage is a new reason for them to deploy their well-known popular “control” tactics. The call for the Cuban pilgrimage for Dog Day was spread on social media with a poster. The poster had a photo of a puppy and encouraged people to meet on April 10th, at 10 AM, in the park on 23rd and F Streets, at the beginning of the normal route to the cemetery.

Days before the scheduled date, some animal rights activists: Patricia Gonzalez, Aylin Sardiña and Betty Batista Romero, were summoned by the police to prevent them from taking part in the event.

“Second Lieutenant Camila and another official showed up at my door around 10:30 PM, to ask me what I’d be doing tomorrow. I would like to take part in the pilgrimage and raise my voice against animal abuse (…), but sadly, I’ve been threatened with charges of sedition if I decide to go. She made this very clear in the subpoena she gave me the day before yesterday, but she believed she needed to warn me again,” Batista Romero wrote on his Facebook page.

On Sunday April 10th, at about 9 AM, there were around four people wearing orange clothes and with their chihuahuas in the park on 23rd and F Streets.

Approximately five minutes later, a stout and grey-haired man, wearing trousers and a checked shirt, told them they’d have to leave. They requested an explanation and he explained that the pilgrimage hadn’t been banned, but that it could only take place within the cemetery’s bounds. The small group agreed to leave.

Susana Bisbe confirmed this on her social media when she informed animal rights advocates that State Security wouldn’t let them begin the march in the park on 23rd and F Streets and that they all had to head to the cemetery.

Hours before the pilgrimage, the Government announced the call for an animal protection fair in different Havana municipalities, on social media. The coincidence with the date and time of the march made some activists suspicious of this government initiative. 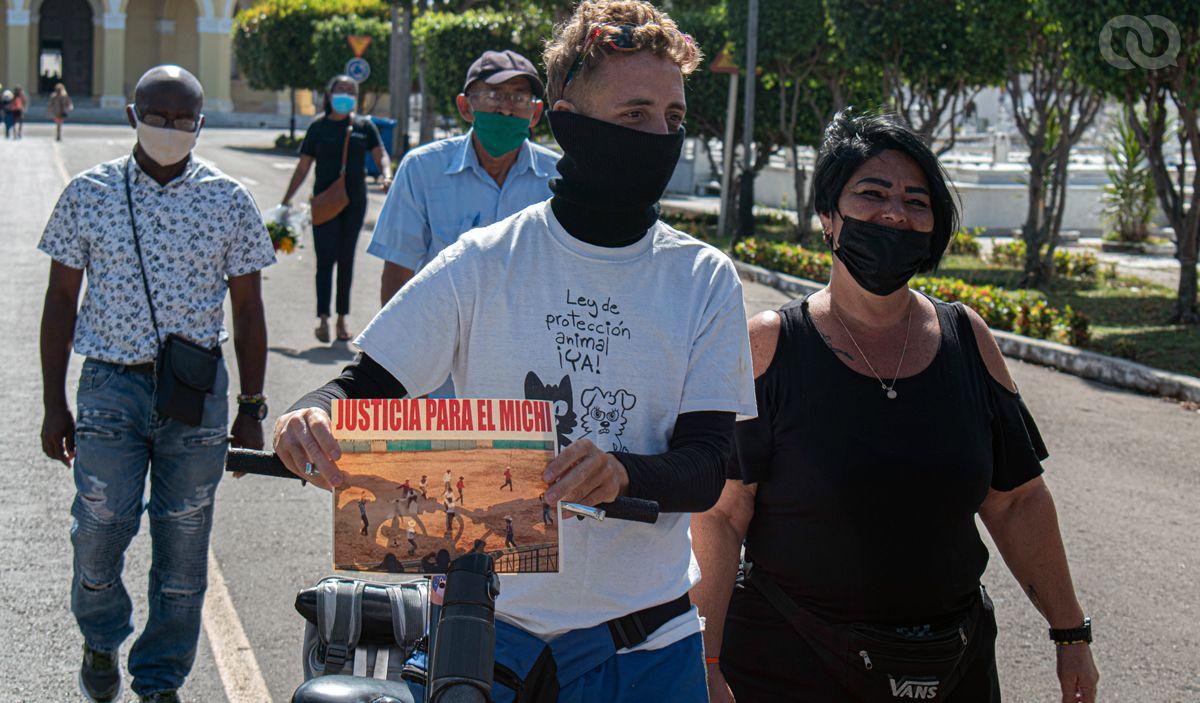 One of the reasons for the animal rights advocates’ march was the abuse of a cat during a rodeo show in Boyeros. Photo: Pedro Sosa Tabio.

What are they scared of?

The first pilgrimage in Cuba for Dog Day was in 1994, from Jeannette Ryder’s grave to G Street in Vedado. However, the 2019 pilgrimage was the most important when hundreds of people took part in a march authorized – and not summoned – by the capital’s government, from Parque Quijote, on 23rd and J Streets, to the cemetery.

In addition to having had a greater turnout than this year, slogans against animal abuse were shouted along the whole way and the police were even present, cutting off streets busy with traffic so that the crowd could pass by.

However, the government’s negative response to similar initiatives in other provinces, suggests that the “authorization” in 2019, could have been a mistake.

The march on April 7th taught many lessons that can be used by those who believe you can legitimately fight for your rights in Cuba or by those who want to expose inconsistencies in Socialist Rule of Law.

Even though the right to protest is recognized in Article 56 of the Constitution, very few initiatives called independently of the Government have been authorized. Others were repressed by police authorities or criminalized when they did finally take place.

On May 11th 2019, Cuba’s LGBTI community held its own march against homophobia and transphobia, after the traditional conga normally held this time of year was canceled. During the peaceful parade, many participants were repressed and arrested by the police, who tried to stop the protest.

On November 27th 2020, a great military operation cut off streets surrounding the Ministry of Culture, where approximately 300 young people held a sit-in to protest the repression members of the San Isidro Movement had suffered. Even though there weren’t any clashes between repressive forces and protestors, the peaceful protest and its leaders were demonized by state-controlled media. Then, some of the participants were interrogated, harassed, and threatened by State Security.

Over a thousand people were sanctioned or sentenced to prison for up to 20 years because of the July 11th and 12th 2021 protests, charged with theft, public disorder, incitement, contempt and sedition.

In October 2021, the Cuban Government denied authorization for a “Peaceful Protest for Change”, arguing that “the reasons for the protest held no legitimacy.” Days later, its main organizers – who created the Archipielago platform – were victims of police harassment and threats, interrogations, slander campaigns in the media and hate crimes.

Against such a backdrop, the Government seems to be intent on stopping spontaneous or programmed protests in Cuban society. However, the pilgrimage against animal abuse took place, even if it was regulated and policed. 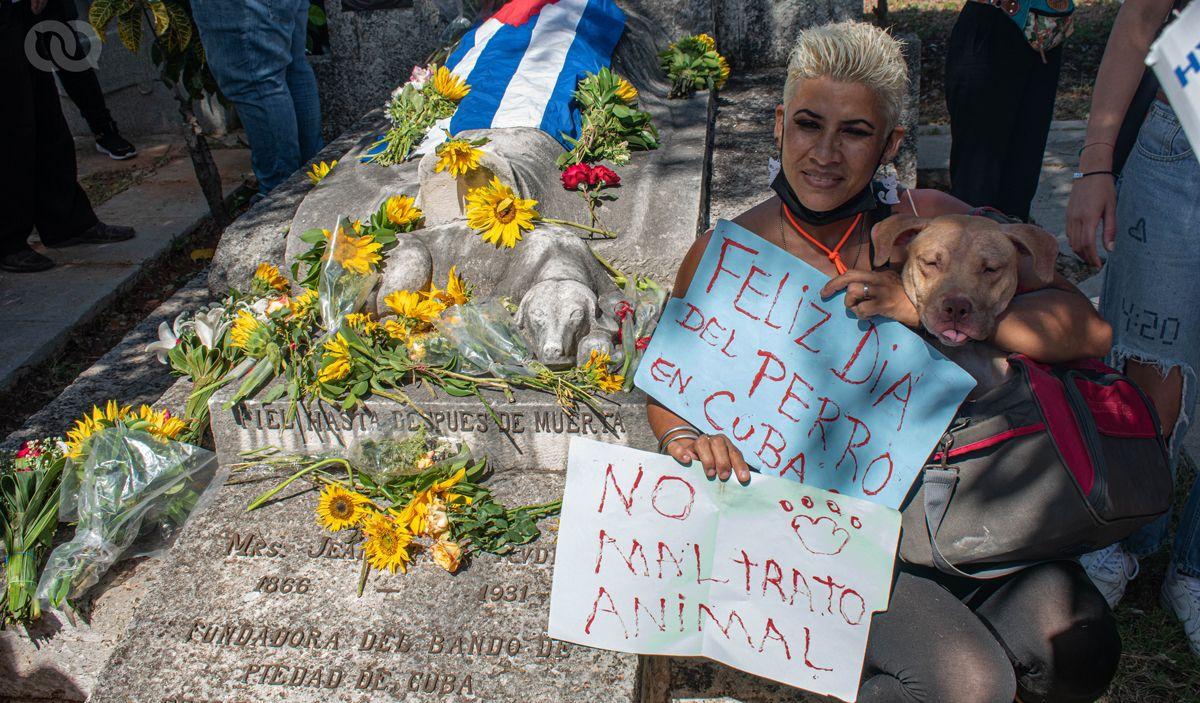 The first pilgrimage in Cuba for Dog Day was in 1994, from Jeannette Ryder’s grave to G Street. Photo: Pedro Sosa Tabio.

Is Dialogue and Understanding Possible in Cuba?A young cuban man and his two fathersTurn Off Your Phone!Cuba’s Constitution and our Chicken RationSkateboarding in Cuba: a Marginalized SportPlease Sign the Anonymous Letter against Me