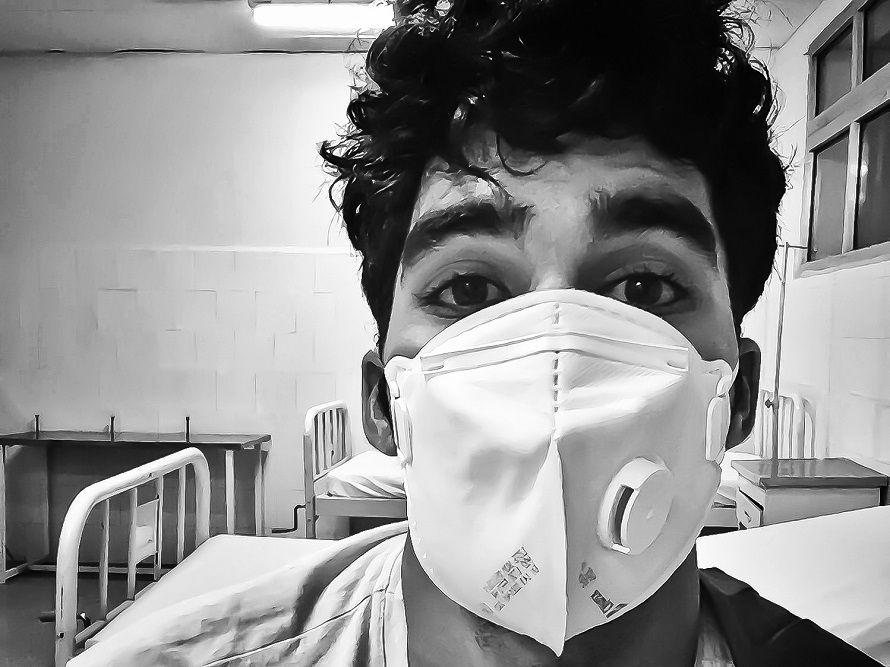 Coronavirus “Case #78” in Cuba Speaks Out

Ruben Dario Herrera was assigned bed 22 at the isolation center in Santa Clara. “It was very strange because the doctors didn’t call me by my name, only by my number,” he said on elTOQUE’s El Enjambre podcast, on Saturday. “I guess that with so many potential patients, it’s difficult for doctors to remember everybody’s name.”

Their suspicions didn’t last very long. On March 27th, he officially became case #78 confirmed with COVID-19, according to the report issued by the Cuban Ministry of Health.

The report featured his information, anonymously, an age that wasn’t his own (another 10 years were added to his 23 years), but they spoke about the young resident in the Ranchuelo municipality, Villa Clara province, who had come to the island from the US. Ruben began to display symptoms on March 23rd and was picked up at a traveler’s check-up that family doctors are doing in the country.

This traveler’s check-up isn’t a protocol that has emerged in light of COVID-19, it has been in force for many years to try and prevent the number of diseases that enter the country. He was referred to the Manuel Piti Fajardo Hospital, admitted and the 12 people he had contact with in the past three days on the island, who weren’t displaying any symptoms, were also kept under surveillance.

A few weeks ago, Ruben had made headlines in different accredited international press in Havana because he had been chosen to participate in the Sail for Climate Change project. Sail For Climate Action was formed of an interdisciplinary team of young people from Latin America and Europe who “seek to strengthen the voice of different climate activists.” The project’s mission was to “give those who have been affected by climate crisis a platform to share their stories.”

This project followed on from his work with the Fridays for Future movement in Cuba, which he founded and led to raise awareness amongst young Cubans about the need for individual action to try and reduce their ecological footprint.

As a member of the Sail for Climate Action crew, he was going to travel by boat across the Atlantic Ocean to Europe, where he would then take part in the UN Climate Change Conference which was going to be held in Bonn, Germany, this year. He had requested to take a semester on sabbatical from his university.

“We had been in the Bermudas a couple of days, getting things ready to sail again, when we were told the project would have to be suspended for the time being,” he said. Every participant needed to go back to their home country. Ruben would go back to the Ifrain Alfonso sugar refinery town, in Ranchuelo. He flew from Miami to Havana, but he doesn’t know where it was that he got infected exactly.

“At one of the airports I bet,” he said. “I was in the Bermudas, New York, New Jersey, Florida and Havana. He had gone to restaurants and shopping malls in the Bermudas; but there hadn’t been any confirmed cases of COVID-19 until the last day, when two were announced.”

Just before finding out he was case no.78, Ruben had shared his concerns on social media about the Cuban population’s low risk perception about the issue and the epidemiological warnings. “We don’t even know if there are more infected people right now who are still spreading the virus,” he said four days before being diagnosed.

He wrote about his quarantine in the hospital on his Facebook page. On Day 2, he was reading; on day 3, he heard the podcast. But just before being admitted into the hospital, he had decided to isolate himself from his family, taking precaution. “I arrived in Cuba on Friday 20th and I was in self-isolation until Sunday, in a room outside the house,” he recalls. His mother brought his food to him. During that time, he sneezed a couple of times, had a cough, rhinitis, allergy-like symptoms. On Sunday, the joint and muscle pain began, as well as fatigue. His temperature went up to 37 degrees and his mother decided to take him to the doctor. “They examined me and brought me to Santa Clara,” he says.

There were three other potential cases in his room. Doctors would come to visit him regularly, they called him by the number of his bed – patient 22 – tested him and it came back positive. “It took three days to do the test because they were waiting for symptoms to get worse and for the viral load to increase,” he explains. “The results took 24 hours to come back.”

Like many other patients with mild symptoms, Ruben thought he didn’t have the virus. Today, he knows that he was a “carrier”, that he could infect others. When his diagnosis came back, he was transferred to the “Manuel Piti Fajardo” Military Hospital. There, he has to take antibiotics and antiviral drugs for 15 days, more or less. Then he needs to be under observation for another 10 days.

“I take a huge cocktail of pills. I am injected with Interferon, which is apparently the strongest, and am also given omeprazol and other antibiotics, even one that is used for malaria (Caletra),” he says. The hardest thing is dealing with the drugs’ side effects: diarrhea, nausea, headaches, general malaise.

He is the youngest in his room. His roommates are old people. They constantly cough, a really severe cough “which even makes them retch.” In the room next door, he knows that there is a 91-year-old woman, who is alone, like everyone, but maybe solitude weighs heavier when you are old. A little more because old age is linked to death and nobody wants to die alone.

This is why Ruben is asking everyone, but especially young people, to be more responsible, more aware, and to follow social distancing and hygiene measures. He knows. He has heard the cough of the 91-year-old woman and his roommates. “Knowing that you are going to live the last days of your life alone,” he says about the 91-year-old woman, “or with strangers who aren’t your family must be heartbreaking.”

It’s even more heartbreaking when being infected can be prevented.

This article was translated to English from the original in Spanish.

Hellish Hours for Cuba with the Passing of Hurricane IanCuba Between Hotels and RubbleShould Mailen Diaz be an Eternal Slave to Gratitude?La Crema Covers Cuban Reality Better Than the TV NewsLisandra, a Cuban Woman Taking Cover from BombsA Cuban Living in Kyiv, Ukraine under Fire