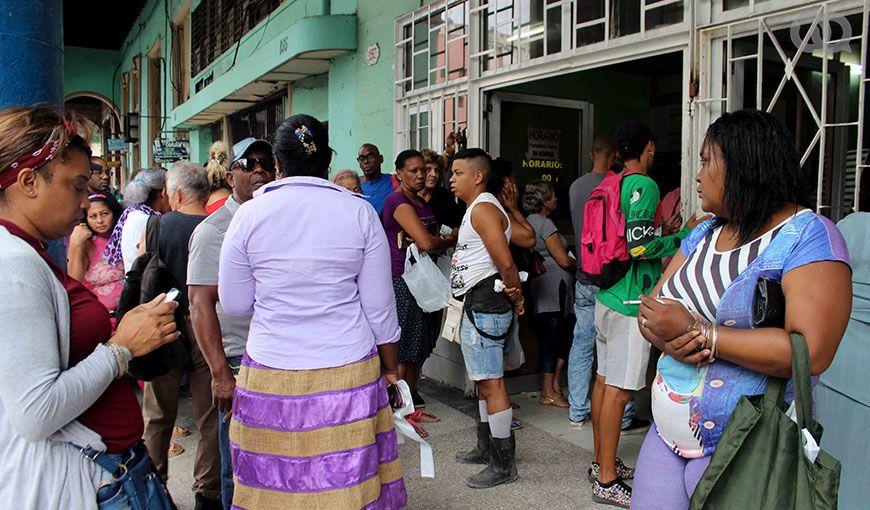 Line at a bakery on Reina street in Central Havana, in December. Photo: Alba Leon Infante

December in Cuba: Dedicated to Bread (?) and Wine… Oh Ceres, hear our prayers, those of us who can’t cultivate wheat, we who need to look out at the horizon and wait for a boat to bring it to us from lands where it grows happily and golden!

Ceres, our rice isn’t enough to feed the population, we have forgotten the technique of grating yucca, we don’t make our most ancient bread, children don’t know what cassava bread is, both in the countryside and cities.

Oh, gods who take away our hunger and allow our furrows to flourish in arable land, why have you made us forget about corn, about the divine tradition of making tamales in corn husks, or in a pot, on Sundays!

There isn’t a Homeland without bread, Ceres, without cereals (a beautiful word that we dedicated to you), there aren’t people with full stomachs. We don’t enjoy the hidden and magical grains of the Andes here on this hot Caribbean island. We ask you to illuminate our leaders so that they don’t forget to pay their debts, that they don’t become defaulters and we pay for their gross negligence with our empty bellies.

Christmas is on its way, the trees that remind us about the child-turned-carpenter’s birth, which are decorated with wreaths that resemble the snow that never fell in Bethlehem.

This year, our leaders haven’t imported products (for us, I mean) to celebrate the holy days of Christianity with knick-knacks and perishable sweets.

There aren’t any decorations, there isn’t any beauty, there aren’t any nuts, or Christmas loafs, the ones that are full of dried fruit, raisins (which are a treasure for Cubans), there aren’t any almonds covered in a fine coat of caramel, or dates, or figs, or anything that reminds us that it is human nature to forget our problems when we have a plate of food in front of us.

We are celebrating Christmas without bread, I don’t mean Italian panetonne with its unforgettable taste, or soft Pandoro which people seem to enjoy by attacking it, rather I am talking about our everyday wrinkled bread roll, the one that wakes us up with its invigorating taste and gets us out of bed to go to our grueling jobs.

Bread, Ceres, bread, dear official who didn’t pay the debt and left us without bread and spare parts, the bread that is eaten in Cuba with tomatoes, avocado, soybean (never olive) oil, with dark sugar, with something that claims to be a kind of butter, with mayonnaise; as you can see, it’s never eaten with Iberian ham, or with goats cheese, and not even with an omelet anymore because we have to save eggs.

There isn’t any bread, or buses to go out and hunt it down, or taxis to go further away and find it once and for all.

We don’t deserve bread on these special days, I don’t know why somebody has dreamed up this strange gift for us. What have we done to deserve empty stores, without anything to give at Christmas, anything to roast, without turkeys and chickens, or bread to dip in the sauce and push the last bit that escapes out of our plates onto our forks.

What is it about these holidays that bother our leaders so much, is Christ’s birth in Bethlehem hazy in their memories, or do they believe it isn’t healthy for us to celebrate days that precede our State and our history.

Happiness isn’t only found in our professional achievements, or accomplishments celebrated at ministry meetings, it’s also necessary to lift up our souls, those of us who don’t go to assemblies or morning pep talks.

There are people waiting for bread, who aren’t satisfied with the awful story about a debt that wasn’t paid in time and are insulted every time we are told on TV that we have to be understanding and have faith.

Nope, we aren’t going anywhere, there’s not any transport to go or return. We are waiting for bread and sweets, we know we are asking for very little, but some of us don’t want to just swallow this reality and carry on. A country doesn’t exist without bread, we have accepted the bitter taste of our plantain wine as a patriotic symbol of our humble dignity, but we will not accept to forget bread or masa real (guava bars).

We want to be swimming in bread, for it to come from France and China, for Venezuelan arepas and Mexican tortillas to come knocking at our door, for bread to be free for three months in compensation for its preventable absence.

Humans have been baking bread in ovens for thousands of years, which is why we are asking for something as basic as going back to our ancient lives. It’s 2018 and we know that Havana has a thousand buses less than it did in 1984, and that there isn’t a single camel bus from the ‘90s, or a Chinese bike, but we want bread, let it come from Europe with the sugar we import (how shameful!) but let it come now!

People aren’t lying, we call bread for what it is, and we have been complaining that our rationed rolls are small and acidic for years, but now that they are gone, we even miss them. And to wine we say… Soroa [where some fruit wines are made], because we don’t know anything about vineyards and their sweet juices.

However, we at least deserve bread and I will dare to demand it, Ceres and Cuban government officials willing.

This article was translated to English from the original in Spanish

Can Cuba Choose Not to Pay Off Its Debt?The Communist Party of Cuba’s Best FactoryNew Requirements for Travelers to Cuba as of Jan. 23Political Control to Abuse of Power in CubaAn Exhausted Country and CityWhen Cuban State Security Comes Calling