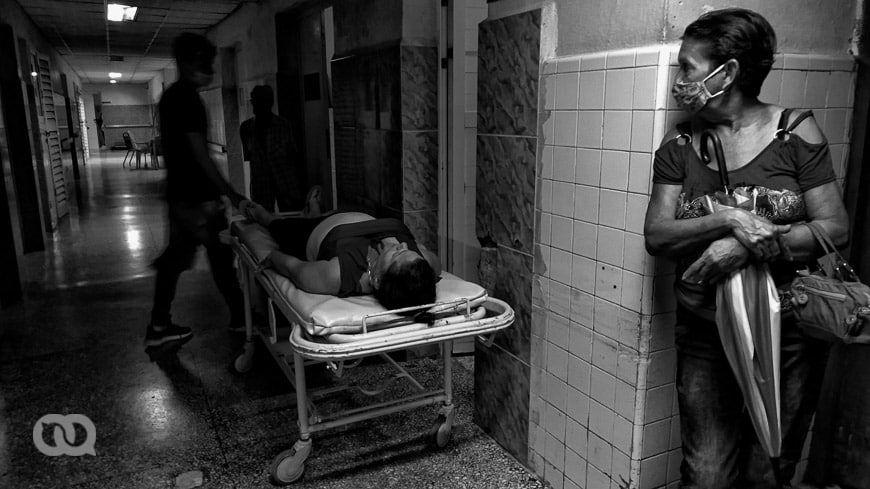 Cuba needs help. It is not a media campaign. It is not a "soft hit." It is not a "mercenary" or "cyber-fighter" thing. It does not only concern civil society and the Government. Cuba needs, with great urgency, all possible help, above creeds, ideologies, fears, prejudices and entrenched hatreds.

COVID-19 has overtaken the national health system. The daily average of positive cases per million inhabitants exceeds the numbers that countries such as Spain, Italy, the United States, India and Brazil hit in their most dramatic moments. The collapse, together with the lack of medicines, also prevents the rest of the services' normal performance. Heartbreaking testimonies of people who have died waiting to be treated in hospitals abound on social media; voices of doctors, nurses and other health personnel exhausted, overwhelmed, not knowing what else to do to contain an avalanche of contagions that overflows their reaction capacity.

It is irresponsible now, from every point of view, to call for massive acts under any political sign or cause; especially from the Government, whose authorities and institutions are in charge of guaranteeing collective security and ensuring strict respect for the health protocol. Survival is what matters the most at this point.

Cuba needs help. It needs those who govern to sincerely acknowledge it and execute a response that meets the pressing needs of today. There is no indignity in asking for support. Given the dimensions of the current crisis, the aid coming from political allies will not be enough nor the most abundant.

Faced with the drama of the death of hundreds of people, it is secondary to question whether the strategy to confront the pandemic that brought us here was the most successful or not; if this or that could have been done better. It is critical to analyze it, point out the failures, identify those responsible, learn; as long as the review and the complaint do not prevent anyone from focusing on the aid: the current priority. There are people who died from not having an oximeter on hand. No one should debate between denouncing it and finding a way for hundreds of these cheap devices to save the lives of many more.

The support that is offered subject to unattainable requirements is of no use at this time, such as the proposal outlined by the US Administration to donate vaccines to Cuba under the condition that they are not managed by the Cuban government but by an independent organization. There would be useful concrete actions by that nation that allow the Cuban diaspora to mobilize more to help their families. For example, restoring flights to Cuban cities other than Havana and regularizing remittance routes.

The US has the best and greatest opportunity to help us. Because of its proximity, its logistical capacity, because it is home to millions of Cuban brothers and sisters who think and feel for their country of origin. Yes, it can be a bitter pill to deal with the same government that violently repressed the July 11 protests, but moral high ground is on the side of those who put human lives ahead of a historic dispute.

The Treasury Department has recently taken measures to ease sanctioned countries's access to critical resources for the containment of the pandemic. Cuba should not be the exception.

Those who, from anywhere in the world, demand from needy Cuban compatriots some political pronouncement as a condition to send them vital aid are not helping. In the midst of so much pain, initiatives organized in Canada, Spain and Mexico are inspiring: Cubans from the diaspora, with unconditionality and generosity, have gathered resources and managed their transfer for the people of which they are part. For those who do not wish to send resources through Cuban official institutions, the Red Cross, churches and representations of international organizations present in the country are at their disposal to send aid.

Let's look ahead. Life is always now. Lost lives are irretrievable. Accompanying the grief of their families also implies the duty to prevent them from continuing to lose members, friends and neighbors.

If a Cuban nation united on diversity has always been a longing, now it is an urgency, it's a question of survival in the literal sense. If transparency regarding the circumstances we are going through has been a legitimate desire, a right many times claimed and ignored; at this moment it is the only way to try to restore the confidence necessary to manage an extreme crisis that reaches political, social and economic dimensions in Cuba.

The citizen or government initiatives that have been articulated to support Matanzas, Ciego de Ávila, Holguín, Guantánamo, deserve all the support and respect. Let's multiply them.

Cuba needs help. May not one more Cuban die due to stubbornness, pride, ignorance, lack of humility or common sense. May pregnant women and children's lives be saved from irresponsibility or alienation of those who make decisions.

It is illusory to ask anyone to abandon their beliefs and immediate pains. Not to a family that demands freedom for someone unfairly imprisoned, nor to an official who believes in their militant message. But something is above all: life. And the best example of humanity is to preserve it.

It's also about Cuba as a nation. It's about us all. In the face of calamity and pandemic --an invisible enemy that does not recognize affiliations to kill--, the only possible way out is fraternity. The room for maneuver gets narrower every day. Now is the time.

La Crema Covers Cuban Reality Better Than the TV NewsTrials Begin for Cuba Protesters without Defense AttorneysThe Internet Blackout that Followed Protests in CubaRaul Prado: “I Have No Hate or Resentment”My Jail Cell, the Path Towards Cuba in the FutureCuba Condom Crisis: Abstinence or Reuse