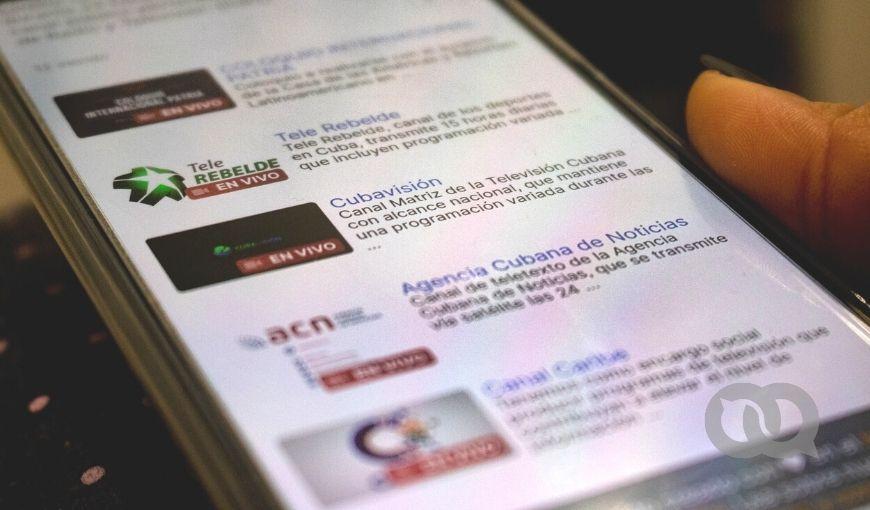 How to Watch Cuban State TV Outside of Cuba

Cuban émigrés tend to stay connected with events in their country of origin, be it through contact with relatives, social networks or different media. Some, perhaps driven by a certain nostalgia, go further and try to follow the series, soap operas and other programs that are broadcast on the island.

The portal teveo.cu of the Institute of Information and Social Communication (formerly the Cuban Institute of Radio and Television, ICRT), contains a repository of audiovisual materials produced by Cuban stations and television centers. In addition, it offers live broadcasts of 79 stations produced by Cuba’s radio network.

However, the highlight of this website is the live transmission of five channels: the teletext channel of the Cuban News Agency (ACN), Canal Caribe, Tele Rebelde, Cubavisión and Cubavisión Internacional.

Supposedly they can be seen live, but in reality–a fact confirmed in several countries and using several browsers–only the ACN channel and Cubavisión Internacional work. Those seeking to access the rest of the channels invariably receive a message on their screen: the video could not be loaded due to a network or server failure, or because the format is incompatible.

The Cuban television website (www.tvcubana.icrt.cu) offers the option to watch these and other channels, including:  educational and educational 2, Multivision, Key Channel, Havana Channel,and  Cubavisión Plus (in HD). In fact, however, only live Cubavisión Internacional is available. For the rest, only the channel’s banner -or the same message that appears on the Teveo platform- appears.

The multinational network Telesur, which is viewed in Cuba, can be seen through the webpage Multivision, but only during the time it is actually being broadcast there.

Nor can live TV be accessed through the official page of the ex-ICR (https://www.icrt.gob.cu/live-tv/) or the platform Picta, Cuba’s so-call YouTube channel. This is despite the fact that both sites claim to offer this option.

Some émigrés often watch Cuban TV by using Kodi software, a multimedia entertainment center through which you can access TV channels from various countries. But according to recent user reports, Cuba’s TVC signal is hard to find.

Facebook is another way to access most Cuban newscasts and other television programs, even in direct transmission. The news programs Cubadebate y Mesa Redonda provide live broadcasts almost daily through their Facebook pages. Individual news reports can also be found on Canal Caribe’s Facebook page or YouTube channel.

In the case of sports, at the beginning of the 61st National Baseball Series, some provinces took the initiative of broadcasting the games live through their Facebook pages. However, this was abruptly suspended.

According to a publication of the TunasVisión telecenter, the National Series baseball games could not be broadcast due to legal disputes over transmission rights.

In 2020, the World Baseball and Softball Confederation announced that its platform OTT GameTime.sport had acquired exclusive rights for the international transmission of the games of the 60th Cuban National Series.

On many occasions, Cuban television, and in particular the channel Tele Rebelde, has announced that they cannot transmit certain sports competitions because they lack the budget to buy the broadcast rights.

As the management of Tele Rebelde explained in December of 2020, “To access most of the main competitions, you first have to buy the broadcast rights, something that has not been possible due to the difficult economic situation that our country is suffering. We apologize to you, and we will continue to strive to improve programming options.”

Many Cubans living abroad follow national soap operas, even the Brazilian ones, that are broadcast in prime time on Cubavisión.

There are also YouTube channels that specialize in Cuban soap operas, adventure programs and dramatic series.  On YouTube, you can find programs ranging the police serial Your Own War, to the most recent episodes of Calendar and the soap opera Tú, which are uploaded scarcely minutes after they are broadcast on the island.

To find many of these programs, which are also broadcast in groups and on Telegram channels, you only need to google them.

In addition, it is possible to find materials produced in Cuba on such sites as Picta or La mochila. These are managed by the Youth Computer Club as an alternative to the “weekly package.” These sites include both Cuban and foreign content that is downloadable, and that is organized into different categories such as series, movies, documentaries, children’s, sports, humor, etc.

Because of US sanctions against Cuba and the tense relations between the two countries, there is no way for Cuba to obtain broadcast rights for US programming. This means, according to a 2013 BBC report, that the US content that is broadcast there is pirated.

The embargo also affects the copyrights of Cuban artists who cannot receive the income from their work that is due them.

As Kenia Padrón, the principal specialist of the Department of International Relations of the Cuban Agency for Music Copyright (ACDAM) explained, “until relations are normalized, neither Cubans nor US citizens will have the possibility of receiving the royalties for their work.”

The Mourning that Comes with Forced EmigrationA Plebiscite without Ballots: Cubans Voting with Their FeetAlejandro’s Odyssey: Escaping to Florida on a Water BikeRio Grande: the last danger for Cuban migrants in MexicoA Cuban in Poland: “This War Touches Me First-Hand”Karla Perez’s Forced Exile from Cuba