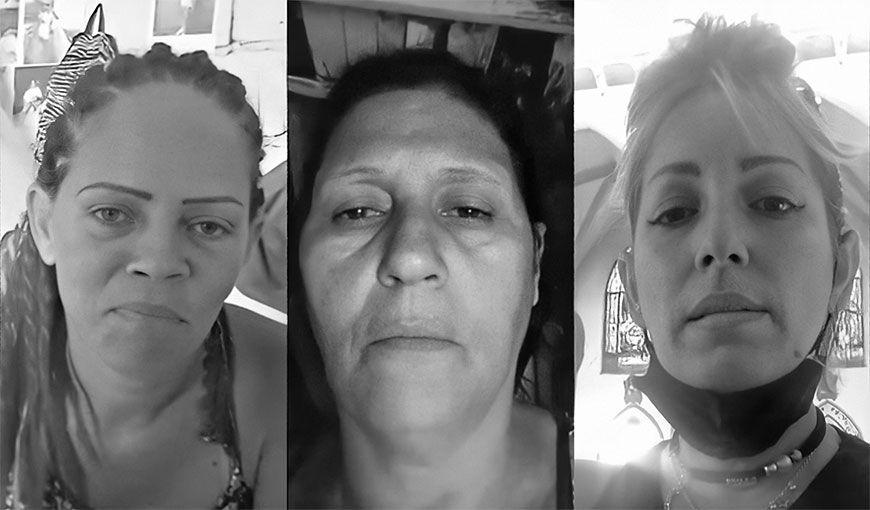 Mothers of 11J Prisoners Demand Justice for Their Kids

In recent weeks, social media platforms have echoed requests for help from mothers and relatives of the young people arrested during the July 11th protests in Cuba. Their voices have come together as one to demand justice and transparency in the legal proceedings that concern their children.

One woman in particular has become a spokeswoman for many. This woman is Barbara Farrat Guillen, mother of 17-year-old teenager Jonathan Torres Farrat, who was arrested on July 13th and is being sentenced for appearing in a video that went viral on social media, in which he threw a rock at police officers.

Barbara Farrat, the mother, was arrested on Friday December 24th and held in police custody for several hours after trying to leave her house. She was released soon after. She held a hunger strike in protest to put pressure on the Government to release her son and she has publicly announced that she is HIV+. According to her own statement, State Security agents have threatened to take her to prison if she continues to use social media to complain about the situation.

In podcast El Enjambre’s last episode of the year, Camilo Condis, Lucia March and Maykel Gonzalez, spoke about this and other cases. According to Maykel, the mothers of the young people in prison have sent a letter to President Miguel Diaz-Canel, which was delivered by Barbara Farrat and her husband to the State Council’s Citizen’s Assistance Office. The letter was signed by 150 people, including relatives and friends of those arrested during the July 11th protests.

“She was able to organize all of this, she has become an activist; she and her husband Orlando Ramirez pushed for this to happen and in the letter they are appealing for amnesty, pardon or a stay in the hundreds of cases of 11J political prisoners. They are asking Diaz-Canel for “a noble gesture that finally puts an end to many families’ suffering,” as they have been separated from their loved ones for many months now,” Maykel says.

Relatives say that the Government would be committing a great injustice if protestors in pre-trial detention are sentenced to prison. The letter addressed to Diaz-Canel urges the legal system and the Cuban Government to “stop and reflect upon the fact that any harm caused, regardless of what this harm was, won’t be resolved with injustice and that a citizen exercising their constitutional right doesn’t constitute a crime.”

Maykel, a young journalist, said that there is a consensus among public opinion that the Public Prosecutor’s requests for 11J prisoners are excessive. “Fifteen to thirty-year prison sentences are being asked for the 15 people arrested in La Güinera,” Camilo explains.

The podcast also shares Maria Luisa Fleitas Bravo’s testimony, another mother who is suffering because of her son’s arrest, who asked for people to share a video in which she asks for help in her son Armando Vazquez Fleitas’ case, who she hasn’t been able to see for three months.

“I am asking for justice to be served and I will continue to demand justice for my son. Armando is currently being held in Valle Grande for having taken part in the July 11th protests, when he took to the streets in La Guinera to protest peacefully. “They arrested him; they’re asking for a 20-year prison sentence for my son as if he were a murderer or rapist. I’m asking you all to please help me; I don’t know what I’m going to do; I’m desperate.”

Fleitas asked people to upload her video to social media “so that the entire world knows what they are doing to young people in Cuba.” She added that there are many other helpless mothers like herself, who need their children to be released. “I am also asking the Evangelical Churches to pray for our children. Please help me, I can’t bear it any longer, I can’t sleep knowing that they are asking for a 20-year prison sentence for my son,” says Armando’s mother at the end of the video.

The mothers of those in prison have said that they are not counterrevolutionaries, that they have played by the rules and have tried every legal channel and procedure available, but their petitions haven’t been heard and they haven’t been given any answers. They strongly disagree with how the Government is treating their children like criminals and counterrevolutionaries, when they have never stepped foot in a police station before in their lives. They are asking to be heard and for their children not to be sentenced to 20, 25 or 30 years in prison. They demand a serious and in-depth investigation and claim that what is happening to these young people is unjust.

“They are being charged with sedition, a crime that is a lot more serious that previous charges of minor offenses, such as contempt. This needs to be resolved with transparency, explain who was and wasn’t violent during the protests, be held accountable in these cases, because people know what’s going on. It is the legal authorities’ responsibility to give some kind of response and even more so in the cases of minors, because it’s absolutely outrageous,” Maykel says.

At another point in the episodle, Camilo talks about a viral post on social media by farmer Leonel Capote about his fellow farmers’ concerns. A lack of water for their crops was one of the problems listed, and many farmers have found themselves forced to carry buckets of water, because they don’t have a well or a pump for watering their crops.

The podcaster echoed the farmers’ complaint about existing resources in the country for the agricultural sector being directed towards state-controlled means of production first, which are less efficient and extremely unproductive. According to official data, the private agricultural sector in Cuba produces 75.9% of root vegetables and 75.3% of leafy vegetables in the country.

“It’s a lot more efficient than the state sector and yet, when resources do come into the country, they are sent to state companies which are a lot more inefficient and produces less. Fertilizers and supplies are being sold with USD prices, which doesn’t make any sense either. You can’t produce efficiently without technology and resources,” Camilo weighs in.

Lucia talks about the Cuban Government’s assessment of the latest actions enforced to control the COVID-19 situation, after a slight increase in the number of positive cases. New Omicron variant cases have been detected, up until now, and the Delta variant continues to be the main strain of the virus in the country. The number of autochtonous cases has dropped and the number of imported cases has grown.

The weekly sketch, titled “Unanimously”, depicts a Christmas dinner of a Cuban family where things take a complicated turn at every unexpected event. The Cuban history section with Monica Fernandez talks about taxes, freedom of expression and Cuban women as a national symbol during the colonial period.