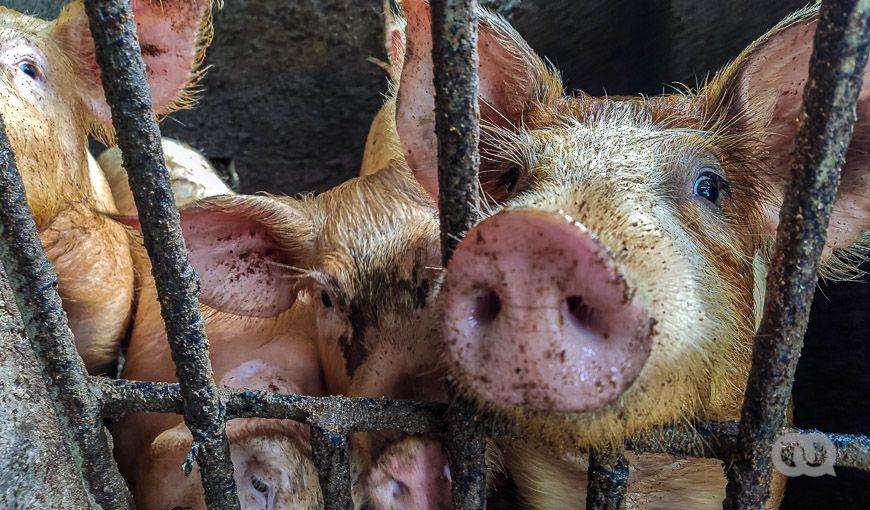 Pigs without feed and Cubans without pork

Cubans can’t imagine a New Year’s celebration without roast pork as the main dish. However, the reality on December 31, 2021 was very different for some families: high prices of pork meant that the longed-for food wasn’t featured on many tables.

Nostalgic memories include a suckling pig sandwich on the street, pork steak at lunch time and even rearing a pig or two in the middle of the city that later inspired the parody song «La puerca de papa» (Daddy’s Pig) by the comedy group Punto y Coma, over 10 years ago.

It was these current shortages and pork prices going up in Cuba that Lucia March, Camilo Condis and Maykel Gonzalez spoke about on the 97th episode of El Enjambre, a podcast by elTOQUE.

Lucia referred to a report by Cuban TV News that labeled pork as a luxury on the table of Cubans that decided to keep it in their diets. «The same news feature admitted that the most typical meat in Cuban cuisine is now too expensive to eat in today’s Cuba».

«The news said that supply and demand prices of pork went up from 50 pesos in 2020 to over 200», Camilo added. «This week, I saw it selling for 230 pesos per pound and you couldn’t buy it by piece, you had to buy the whole leg. According to official figures shared during the report, some 26,000 tons of pork are expected to be produced this year, which is ridiculously low considering 200,000 tons were produced in 2016».

«To give you an idea of just how dire things are», the podcaster continued, «only 52 tons of pork were produced in Sancti Spiritus, in the first few months of 2022. That is the equivalent of how much Cuba used to produce in just one day back in 2018».

Emilio Interian, a pork producer interviewed in the news report, said that the main cause of this crisis is shortages of fodder for pigs. The situation is so serious that the farmer has two to three pigs starving to death on him every day, which affects breeding. Births before used to give an average of ten to eleven piglets, but now the average is five to six.

The report gave statistics that allow us to quantify the reduction in fodder imports for pigs. In 2017, there were approximately 14,000 producers with pork agreements in Cuba, while there are only 1400 registered pork producers today, which means that 90% of them stopped rearing pigs for sale.

«Farmers are buying fodder for pigs via the Gelma marketing company at US dollar prices on the magnetic MLC cards, which has shot up expenses and forced them to hike up prices in order to continue producing. Where does a farmer get MLC (The magnetic cards in USD that people don’t earn in Cuba) to buy fodder from? They have to buy the MLC with their pesos on the illicit market, because there’s no other choice», Camilo explains.

The young podcasters also mentioned controversial statements made by Pastor Barbaro Marrero Castellanos on Cuban TV show Palabra Precisa, on April 1st. The religious leader was invited to talk about the draft Family Act, along with Pastor Dora Arce Valentin. The program stirred a commotion on social media with Pastor Marrero’s statements and many independent media outlets echoing the news.

The pastor said that, in line with the Baptist Church’s teachings, the Family Act has positive aspects such as caring for the disabled, elderly and family conflict resolution strategies. But he also spoke about what he considered to be negative aspects of the Act.

«One of the first criticisms he made, which I was completely taken aback by, was that parents’ rights are limited if they aren’t able to use corporal punishment on their children. I never thought that hitting children would be a priority for members of the Church. It never entered my mind that a pastor would say on national TV that he wanted the right to beat his children; moderately, but to hit them. What the hell is that! I don’t understand», Camilo says.

«Corporal punishment in our society and country is perfectly normal, it’s been going on since the time of our great-great-grandparents», Maykel points out. «Physical beatings were never a thing in my family because my father had suffered them when he was a child, and he decided he would never beat us, as he believed they were counterproductive».

The statement from the religious leader that really sparked outrage was the following: «The Church isn’t called upon to adjust to the times, like we say today; the Church shouldn’t have to adapt, but should rather be a driving force for society to change; the Church isn’t a thermometer that adapts to the weather around it; it is a thermostat that is called upon to establish a healthy climate for society not to become corrupted».

In this regard, Camilo said: «This is a tough one because we are talking about a secular State where the Church hasn’t had any formal power since 1959. I’m also shocked that he would say on national TV that the Church is who should be the one defining society’s rules and dictating the laws that we live our lives by».

The El Enjambre podcasters also gave an update on US-Cuba relations, talking about an interview published on Cubanet with US Charge d’Affaires in Cuba, Timothy Zúñiga-Brown.

Regarding resuming consular services in Cuba, the US diplimat said that they had been working internally and with the Cuban Government to gradually resume the immigration visa process. He specified that it would only be this kind of visa, not tourism or short-stay visas for the US. He said that they were working on building up their personnel to process more visa applications and that for now applications continued to function at the US Embassy in Guyana.

Regarding the current exodus of Cubans towards the US, Zúñiga-Brown pointed out that the number of young people leaving was especially a cause for concern, and the way they leave, especially those who travel by sea. However, he admitted that there had been a turnaround in the flow of people from Cuba who now prefer to migrate by land, which means many more are crossing the border.

«We know that many of the main reasons for illegal migration are a lack of economic opportunities, citizen security, and respect for human rights and basic freedoms (…). The agreement that exists is to grant a minimum of 20,000 visas per year, however, the number of people leaving Cuba is much higher than this. I get the idea that there are many more reasons Cubans are leaving Cuba», the US diplomat said.

When talking about US-Cuba relations, Zúñiga admitted that they have always been difficult, but that this may be the worst time in decades since the Revolution triumphed. He referred to those arrested during the July 11th protests and appealed to the Cuban Government to respect freedom of thought, speech and assembly, rights recognized by the Cuban Government in the UN Declaration of Human Rights.

Follow this link to listen to all El Enjambre episodes in Spanish only.

Recycling Materials Is a Natural Must-Do for CubansWhat Happened in Cuba with Cockroach Milk?House/Apartment Prices in Cuba: Where Is it Cheaper to Buy?Veganism, Vegetarianism and Free Choice in CubaLess Food and More Kitchen Time in CubaStory of a Whirlpool: Inflation in Cuba and Venezuela