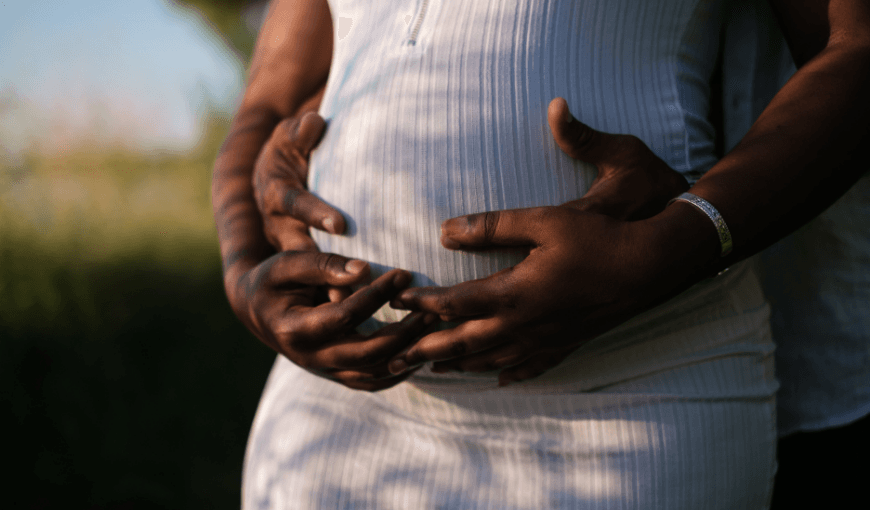 “We’re pregnant” is an expression which, far from being a simplism, joke or pretentiousness, announces the silent revolution of fatherhood, in language too. Using this phrase implies a combination of pride, responsibility and commitment. It establishes a deeper and more equal feeling of being a partner, of being more human, more emancipatory. It also expresses the shared fear and uncertainty, which comes with such an essential change (such as procreation) in your life.

Battered myths and habits linked to fatherhood come tumbling down, like a castle of cards, when this phrase is used. Revealing a different understanding to that phrase in the popular imaginary that consecrates the mindset that “there is only one mother, but fathers are like grains of rice.”

Being a man, masculine and a father is a triad that has historically carried the heavy burden imposed on it by the patriarchal system. Social orders of disciplining and providing for children, far-removed from affection and even their physical presence, are showing their cracks. Today’s society molds new kinds of associated masculinities and paternities in reality, and outlines them as a model to follow. It is estimated that fathers nowadays spend 30% more time with their offspring than the generation that came before them. A noteworthy statistic.

In Cuba, we have an app called “The Complete Guide to Paternity,” accompanied by the slogan “Father from the beginning.” There are also projects for groups of men who are getting ready for their child’s birth. In our day-to-day, more and more pregnant women are being accompanied by fathers when they go to doctor’s appointments during the gestation period.

The common denominator in this and other practices lies in assuming that men are just as important as women when it comes to their child’s wellbeing, during the pregnancy itself, in caring for the child and in domestic and education-related tasks. A vision that tries to do away with the representation of pregnancy as something that only happens to women and the way their body changes, detracting from the father’s role a lot of the time, and their emotional involvement in the gestation period.

It’s true that we men don’t suffer a hormonal revolution, nor physical changes to the same extent women do, nor can we give birth. However, we are afraid, anxious, dubious and uncertain in many regards, just like mothers are. Our experience of pregnancy plays out on an emotional level.

Beyond everyday check-ups, projects and events that have revolutionized paternity, science reveals the rigour of being a father and makes headway in dismantling preconceptions, myths and reductions about this vast universe.

Studies have proven that in many other animal species, such as human beings, the father takes part in looking after the children so that they can be born and grow. These behaviors range from looking after and keeping eggs warm to feeding the newborn themselves, providing body heat and protecting the child against potential predators.

In an interesting article under the headline “Paternity, a vision from a bio-psychosocialperspective, “Adonay Martinez Perera, from the Natioanl Center of Genetic Medicine, stresses that there has been an important change in masculine behavior during pregnancy, and our chemistry takes care to reduce our sexual appetite when fertilization is no longer possible. Testerone (man’s main hormone) production drops and can fall by up to 33% when their partner is pregnant. Meanwhile, prolactin, a hormone involved in a woman’s ability to breastfeed, increases by up to 20% above average levels.

The most interesting manifestation of these changes is called Couvade syndrome, or “empathetic pregnancy), which some fathers experience, especially when it’s their first child, and they don’t tend to have any symptoms to those of their partner. Different studies describe symptoms that range from mood swings, cramps, exhaustion, cravings, inflamations, changes to your sleeping habits, anxiety, a drop in libido and even birth pains, in the most extreme of cases.

As this happens, there is evidence that proves that estradiol, estrogen involved in mammal’s and non-human primates’ motherly instinct and behavior is linked to tenderness, emotions and sensitivity. After birth, studies reveal that oxytocin levels increase in fathers, just like they do in the mother, which encourages an emotional bond with the baby. There have even been cases of fathers suffering from post-partum depression.

Martin Maldonado-Duran and Felipe Lecannelierala made an interesting analysis in their study, “Fathers in the perinatal phase“, and said that Couvade syndrome has been described in a wide range of fathers, between 11-97%. As a result, they say that it might be more useful to think that almost every future father will display some symptoms. However, the Syndrome itself is a wide-ranging phenomenon and is a lot more common than what we might think.

This act of empathy with their partner during pregnancy has been tracked in different cultures. In his research, English anthropologist Edward Taylor describes interesting paternity rituals in communities in India and Papua New Guinea. In some of them, men lay down and simulate delivery pains as a ritual, when the birth date draws near. This is good for two purposes, at least: establishing who is the father before the entire community and to attract evil spirits, tricking them so that they unleash their fury far from the real mother.

Among the Efe people (previously called pygmies), fathers took on a prominent role in taking care of the baby, a lot more than what is seen in any other socio-cultural group. Similarly, some traditional African cultures have a kind of Couvade ritual where the man feels the pain and anguish during birth, while the woman delivering the baby doesn’t show any symptoms.

In most traditional societies, fathers aren’t present during their child’s birth, as it’s considered a woman’s affair. Nevertheless, more and more male partners are present during the birth. Martin Maldonado-Duran points out that this phenomenon is relatively new and very little is known about the effect that the father’s presence at birth has on the mother and baby, and the impact it has on the new father’s emotions and behavior.

Fatherhood also implies an extremely important moment of growth for men. It’s a lot more serious than what the patriarchy has allowed us to see and take on. The father is experiencing change on a biological, biochemical and cerebral level, preparing him to bond with his baby, but there are also psychological and social changes tied to the cultural expectations of what it means to be a father and how to take this on.

The revolution of paternities (read here: the relationship between men and their children), demands a shift in view on the father’s participation during pregnancy, birth and the postnatal period. It implies recognizing the bonding interactions between him and his children, and the impact on him being their protector in the long-run.

The revolution of paternities, as part of a process of knocking down the patriarchal system, has a broad spectrum that looks at behavior, emotions, values, socio-cultural structures, laws and the language used to refer to the man, being masculine and being a father. Within this long and complex process of change, “We’re pregnant” is a more fertile expression than what we might imply.

What Houses Say about Today’s CubaCan Cuba Choose Not to Pay Off Its Debt?The Communist Party of Cuba’s Best FactoryNew Requirements for Travelers to Cuba as of Jan. 23Political Control to Abuse of Power in CubaThe Numbers Behind the New US Parole Program for Cubans