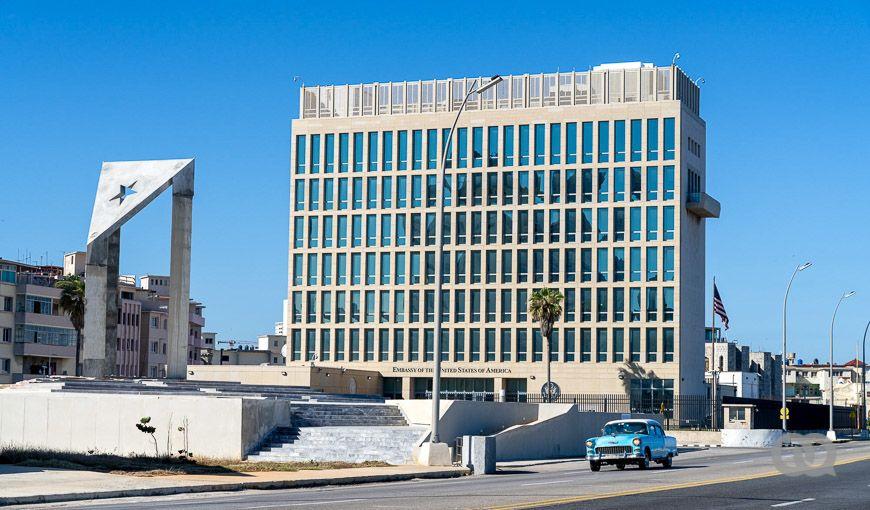 The US Embassy in Havana, Cuba. Photo: Ernesto Verdecia

What Changes Came Out of the Cuba-US Migration Talks?

US and Cuban officials met in Washington D.C. on April 21st for talks on issues related to the Migration Agreements between the two countries.

According to standard press releases, the mutual interest is to enable safe, legal, and orderly migration. However, the current migration crisis in Cuba shows that there are several obstacles to achieving that goal.

Beyond the usual rhetoric of both governments, no concrete actions were reported to reduce the flow of Cubans who arrive daily at the US border, and which in March 2022 exceeded 32,000.

The Biden administration stated that among the US interests is promoting family reunification and promoting greater respect for human rights and fundamental freedoms on the island.

Likewise, Cuba reiterated its concern about the measures of the US government “that stimulate migration, generate socioeconomic conditions that encourage people to leave the country and that reinforce the blockade, cause loss of life and the commission of crimes of smuggling of migrants, immigration fraud and human trafficking.”

Although the US government noted that these talks “are generally held every six months,” those on Thursday represented the first of the Migration Agreement talks between Washington and Havana since 2018.

The resumption of these meetings could be a positive signal for the immigration issues that are still pending. These include the reestablishment of consular services at the US embassy in Havana and the Family Reunification Program —suspended in 2017— and the granting of the 20,000 annual immigrant visas agreed after the rafters crisis in 1994 and suspended since 2017.

According to the content of the agreements, on the negotiating table is also the commitment of the United States to return to the island Cubans intercepted at sea who cannot show “well-founded fear of being persecuted if they are returned.”

Although this aspect has seen compliance —1,399 have been intercepted by the Coast Guard—, since the reopening of the island’s airports in November 2021, the Díaz-Canel government does not accept any Cuban deported through commercial flights or charters.

Cuba’s commitment since 2017 is also to accept Cuban citizens who have been ordered expelled after illegally entering US territory and not qualifying for humanitarian aid.

“Cuba will reintegrate the returnees into Cuban society, without measures being taken against them, as a consequence of their attempt to emigrate illegally,” establishes the Cuban commitment.

According to the authorities of the Office of Detention and Deportation (ICE), there are already 40,000 Cubans with a deportation or expulsion order. However, after the refusal to receive them on the island, they are granted a permit to remain in the US with an employment authorization and driver’s license. The all-time record of 3,385 deportations to Cuba was set during the Trump administration.

Recent statements by the US Secretary of Homeland Security, Alejandro Mayorkas, foresee a possible reestablishment of the Cuban-American migratory agreements.

“We are exploring the possibility of resuming that [migration agreements], and it is a reflection of our commitment to legal, orderly, and humane ways so that individuals, including Cubans, do not take, for example, the seas, which is a journey extraordinarily dangerous,” said Mayorkas during the Ministerial Conference on Migration and Hemispheric Protection, held this week in Panama.

Although Mayorkas’s statements occurred before the meeting on Thursday, the press releases from both governments confirm that there is interest in changes occurring in the near future.

“Participation in these talks underscores our commitment to hold constructive talks with the Government of Cuba when appropriate to advance the interests of the United States,” the US State Department statement highlighted.

Meanwhile, the Cuban delegation concluded that “the United States must stop hindering and violating the rights of Cubans to travel to third countries in the area and demanded compliance with the bilateral migratory agreements in their entirety and not selectively.”

The bilateral dialogue has generated uncertainty within Cuba for those who plan to reach the United States border by traveling north from Nicaragua, and today they are concerned about possible measures that hinder their objective.

Meanwhile, in the Cuban exile community, the talks have generated controversy, because some demand a representation of the Cuban-American community in these meetings, and others are unaware of any usefulness in this meeting, which, they say, legitimizes the government in Havana.

Rio Grande: the last danger for Cuban migrants in MexicoIs US-Cuba Immigration & Remittances Policy Loosening up?Airbnb Fined for Violating the US Embargo on CubaUS Consulate Services in Havana: Holding onto HopeThe Fate of the Cuban Migrant Caravan in SurinameBiden’s victory does not guarantee a new normalization of relations