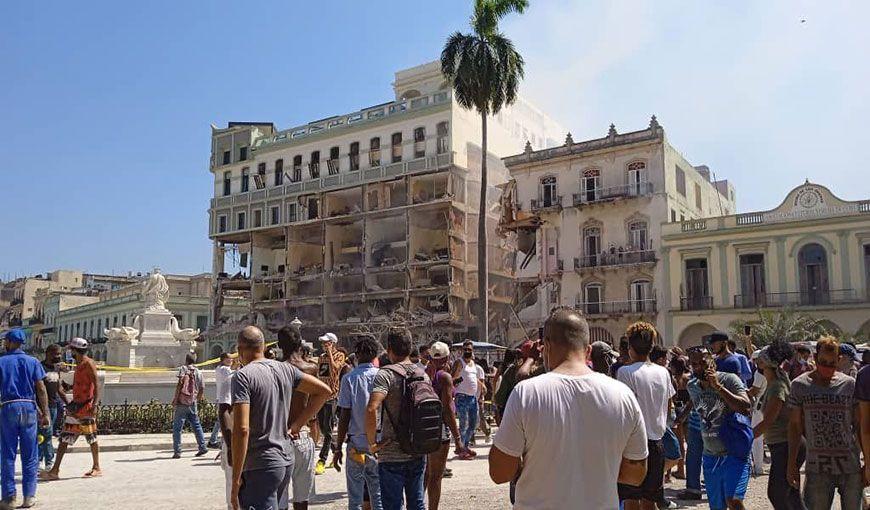 A large portion of the Saratoga Hotel in Old Havana was destroyed in the explosion on the morning of May 6, 2022. Photo: Social Networks

The Saratoga Hotel in Havana Collapses

A large part of the Saratoga Hotel, located in Old Havana, collapsed this morning, May 6, 2022. The original façade of the property collapsed, as well as at least a third of the adjoining building. The damage is considerable, and the exact causes of the accident and the number of fatalities and injured is still now known.

Several posts on social networks showed widespread chaos at the accident site, large volumes of debris and damage to the environment near the site. A tweet from the Cuban Presidency said that the explosion in the hotel was caused by a gas leak; although investigations continue.

There is a danger that the collapse of the buildings will continue, so the authorities are expanding the perimeter for evacuating people near the site.

Carlos Ricardo Pérez Díaz, national director of the Integrated Emergency and Medical Emergency Service (SIUM), who is at the scene of the incident, reports the preliminary figure of 19 injured and two deceased so far. Most of the victims are transferred to the Hermanos Ameijeiras, Calixto García, Manuel Fajardo and Miguel Enríque hospitals where they receive medical attention.

Law enforcement and rescue forces are in the vicinity of the Saratoga, as well as a considerable volume of citizens, who in some videos are seen helping in rescue efforts.

The Saratoga hotel belongs to the Gaviota group, inherited from the extinct Habaguanex of the Office of the Havana Historian. It had 96 rooms and was not open to the public at the time of the explosion. Its reopening was scheduled for the next few days, so there were service personnel inside the building.

Educational Toys in Cuba: a Useful and Growing MarketHouse/Apartment Prices in Cuba: Where Is it Cheaper to Buy?Cuba: Silence and More HotelsPandemic Times in Cuba: “Do You Consider Yourself Vulnerable?”What Happened Jan. 27 at Cuba’s Ministry of Culture?What’s Going On with Rice in Cuba?